Earwig and the Witch is the latest film from Studio Ghibli and it certainly has a different feel than their previous films.

My family loves Studio Ghibli movies so we were very excited to watch Earwig and the Witch. We knew this was going to have a different animation style, and because of that, it never gave off the classic Studio Ghibli vibes. While the story is decent, it feels like half a movie. Because there is no sequel in the works that I know of, this is unfortunate.

Earwig and the Witch is about a young girl named Earwig, who was left on the steps of an orphanage when she was just a baby. The note she arrived with said that the woman that dropped her off angered a coven of a dozen witches, and she would be back after she shakes them.

Then years have passed and she is still at the orphanage. However, early on we see her adopted by a strange woman and a man. A witch and a mandrake. What follows is a story about family, confidence, and magic.

My girls are 8 and 9 years old and they really enjoyed this movie. Although when it ended my youngest started crying because she didn’t want that to be it. She felt like she needed more to the story and I admit, I felt the same way. There were too many unanswered questions. In order to avoid spoilers, I am not going to give specifics, but I needed more.

What Works With Earwig and the Witch

This movie isn’t all bad, though. There are a lot of great moments. The animation style, though different, actually worked for me every so often. I really liked pretty much any scene with the mandrake in it, but I like dark and creepy things. There are some cool effects toward the end with him, and he is a bit freaky. That being said, yes, this movie could be a bit scary for younger kids. Although both my daughters were fine.

Watching Earwig and the Witch as a family was a lot of fun. We did have a great time and there are a couple laugh out loud moments that had us all cracking up. I enjoyed the second half of the film much better than the first, because it felt like it took too long to get to where it was going. I would have loved more backstory about Earwig’s mother and the coven — which we don’t get well, at all really. But once the story does pick up, I was in it. I was ready for big reveals. And then it ended. 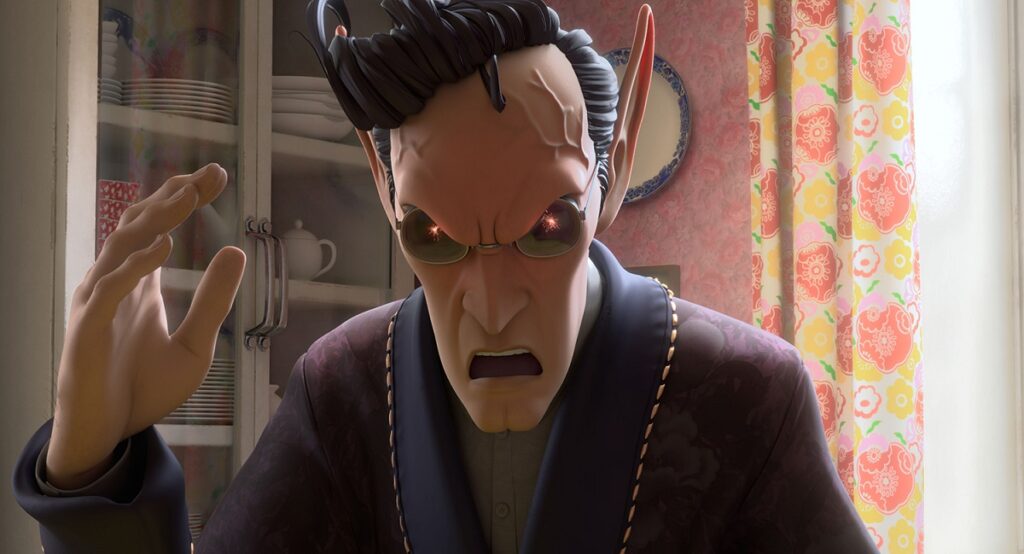 What Doesn’t Work With Earwig And The Witch

I have to say my biggest issue with this movie is the ending and the pacing. It seems like as soon as the movie really gets going, it ends. I would have loved more and I hate having so many unanswered questions. That being said, my husband is a big fan of the ending, so this could be one of those movies that hits or misses with people.

Earwig and the Witch feels like only half a story and that is what bothers me so much about it. It is by far its biggest downfall. By the time the good stuff starts, the whole ends and left us going – huh? That’s it? That’s how this ends? This isn’t part one, right?

Another thing that really bothered me throughout the film is Earwig’s attitude. She has some spunk and some sass, but she also has a bit of a mean streak. Rightfully so at times, but this is not something I want my daughters to mimic. They know better but this is something parents might want to watch out for because yeah, this girl has an evil side.

Studio Ghibli films often have a lesson about nature, and that felt like something lacking from Earwig and the Witch. There are still some good lessons about family and confidence, but I would have liked a little more nature thrown in as that is what I have come to expect.

The story overall is fine, I suppose, but I needed more. I know I am not the only one who feels this way. Earwig and the Witch just feels like half of a movie and an incomplete story — there is no better way to describe it. However, if they were to bring in a sequel, I would one hundred percent watch it.

This movie could be a tad scary for younger kids, especially when it comes to the mandrake. For me? I think he was my favorite part. The animation style is not what I am used to, but I enjoyed it enough here and there. Earwig and the Witch is a family friendly movie that just doesn’t have the classic Studio Ghibli feel.

Oh, and watch through the credits — there are some fun Studio Ghibli nods!

About Earwig and the Witch

A headstrong orphan discovers a world of spells and potions while living with a selfish witch.

Earwig and the Witch is in theaters February 3 and streaming on HBO Max February 5.