Black Bear is a dark, gritty, mysterious, thriller type movie that just might leave you thinking “what did I just watch?”.

Have you ever watched a movie and when it ended you thought, what the heck did I just watch? Well that is Black Bear in a nutshell – but not in a bad way. I would consider this movie a dark and gritty thriller, and if you like Aubrey Plaza, you are going to love it! This is easily one of her best performances, and she is fantastic in everything she does.

The official description of Black Bear is that a filmmaker with writers block is invited into the cabin home of a couple as an artists retreat. She is there to perhaps try to get the flow of writing going again. In the interest of coming up with a great story, she starts to manipulate and cause deceit and jealousy between the two.

I don’t dare say that much in this review as I truly think Black Bear needs to be watched with fresh eyes. I knew nothing about it, really, going in and I highly recommend others do the same. If you know too much, I don’t think it will have the same effect on you. Don’t even watch the trailer, if you can avoid it!

Just know that Aubrey Plaza is amazing in it. The rest of the cast is pretty darn great too. The cinematography and the way this movie is shot – especially the second half – deserves all the awards. It is a bit dark and gritty, but there is no gore. Probably one of my favorite movies I have seen this year so far.

I cannot explain what I just watched, but it was phenomenal. Dark, gritty, suspenseful, mysterious, artsy and oh so meta are the best words to describe it. I have at least three theories about what truthfully happened in this movie — and I feel like all three of them are possible.

Aubrey Plaza crushed her role, per usual, and her performance alone makes Black Bear worth watching. However, if you like dark and gritty movies with a bit of thriller and suspense mixed in, you are going to love this film! Even if the ending has you wondering what actually happened in it. 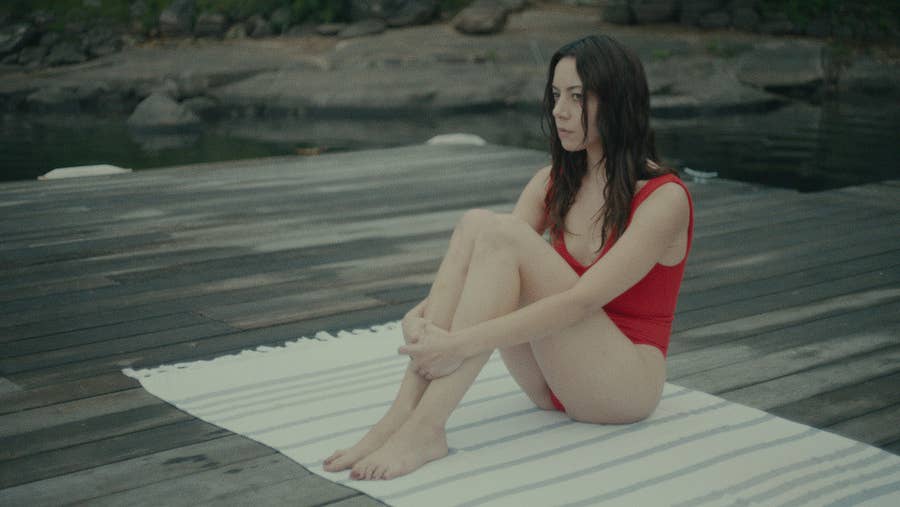 At a remote lake house, a filmmaker named Allison (Aubrey Plaza) arrives to play house guest to a troubled couple (Christopher Abbott and Sarah Gadon), who have eschewed their life in the city after inheriting a family retreat. Battling writer’s block, Allison sparks a calculated game of desire and jealousy in pursuit of a new work that blurs the boundaries of autobiography and invention.

BLACK BEAR explores the complex nature of relationships, gender dynamics, and the erratic nature of love as it traces the conflict between our lust and our longing for internal harmony.

Black Bear is available to rent or buy on Amazon Prime Video.