Fans of the Haunted Mansion rides at Walt Disney World and Disneyland are sure to love this game from Funko Games! A huge THANK YOU to Funko for sending it to me so that my family can check it out!

My family loves to have family game nights several times a week. And as I am sure you know, we are HUGE Disney fans. We are Disney Vacation Club members so we visit the parks often. One of our favorite rides? Haunted Mansion of course! So we were thrilled to discover that Funko Games has created a Haunted Mansion game that includes all of the iconic ghosts and rooms!

This game is for four to six players, which I love! As a family of four who often has my in-laws over for game night, I am excited to add another game to the list of ones we can play! Especially since they have gone to Disney World with us before, so we know they love this ride too!

I have to admit, the first play through of a game for us is usually spent checking the directions almost constantly. But not with Haunted Mansion! One quick read through is all we needed. The directions are explained perfectly and the more we read them, the more excited we got to play. I also love that Funko Games includes cards that list the actions you can choose from during the action sequence, for quick and easy reference during gameplay. Meaning we don’t have to pull out the directions book.

There Is A Strategy To It

The point of the game is to socialize with the Happy Haunts by collecting matching sets of ghost cards. There really is a strategy to this game, which I got better and better at the more we played. At first I was just collecting cards of my favorite ghosts from the ride. I quickly learned that is not the best way to get the most points and win!

Players collect ghosts by exploring all the classic rooms of the ghost-infested manor, from the festivities-filled Ballroom to the Attic and out to the Graveyard and beyond in search of spirits. But just as the Ghost Host tells you when the ride starts, beware of the Hitchhiking Ghosts! They are notorious for “following you home” and that may spell your doom in the end! Why? Well as they pass through the rooms you are in, you have to take one haunt card. And if they end in your room? You have to take two! 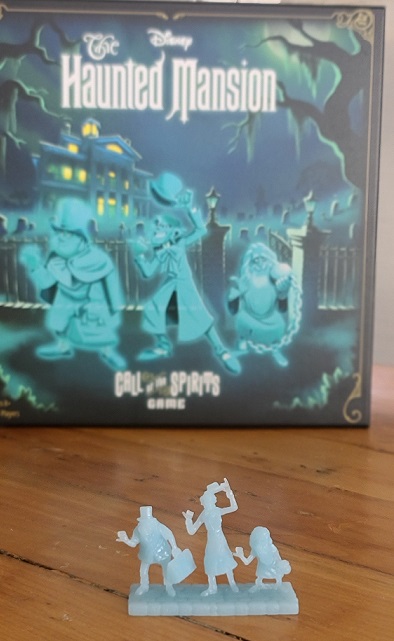 Trust me, you want to avoid haunt cards at all costs! All haunt cards have a number between 1 and 3. The player with the highest total haunt value at the end of the game must discard ALL of the type of ghost cards they have the most of. This could seriously hurt your game and should be avoided at all costs!

Don’t worry though, there are a few ways to get rid of haunt cards! But also, other ways to pick them up. You have been warned! The haunt cards were my husband’s downfall as he was constantly dueling with people, Like I said above, there really is a strategy to this game. But not too much of a strategy to take away from the fun, don’t worry.

The Haunted Mansion: Call Of The Spirits Game box says that one game takes an average of 30 minutes. I would say that is pretty accurate, but of course, it depends on how many players you have. Our family of four has played five times so far, with game length ranging form 20 minutes to 45 minutes.

The game also suggests ages 8 and up. This is probably close to accurate as well, although my 7 year old plays without a problem. We have been playing “advanced” games with her for years now though. She has actually won a few times because the girl — she has a strategy down! She is constantly dueling with those that will give her the ghosts she needs, and she tends to put us in harms way with the Hitchhiking Ghosts all the time. She is a smarty pants!

But really, you know your kids. And if your child likes Disney and Haunted Mansion, they will probably enjoy this game. Will they pick up the right ghost cards and collect the most points? Probably not. You never know though, they could be better at this game than you are!

As a massive fan of Haunted Mansion, this is easily one of my favorite games we have played recently. It might have even replaced Back To The Future: Back In Time as my number one board game. One of my favorite things about this game, besides all the iconic ghosts and mansion rooms, is that it is short enough to play on a week night! This means our family gets to play it more than once a week.

Haunted Mansion really is the perfect game for fans of Disney World and the ride. It is a a great family experience and we have a blast dueling with each other to try to steal ghosts that will help our points in the end! But dueling is also a good way to add haunt cards to your pile which trust me, you don’t want!

If you are a Disney family like us, you are sure to spend quite a bit of time inspecting all the ghost cards. There are so many little Easter eggs and fun tidbits on them. I recommend not doing this during gameplay though or you might accidentally move yourself to a room that doesn’t have the ghost card you need anymore (been there, done that!).

In closing I just have to say that if you love Haunted Mansion and the ghosts inside of it, you are sure to love this game. It is a fun bonding experience, quick enough for weeknight gaming, and something the whole family is sure to enjoy! I rate this a must play! 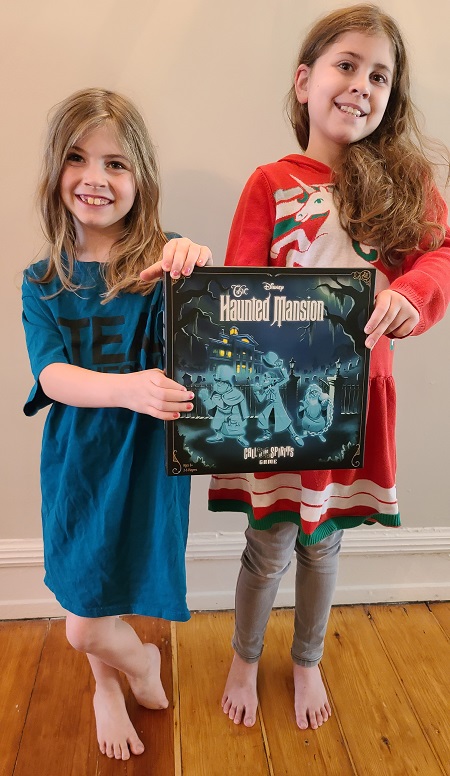 About Haunted Mansion: Call Of The Spirits Game

Disney’s beloved The Haunted Mansion comes to life—err, death—in this hauntingly fun family board game! Explore all the classic rooms of the ghost-infested manor, from the festivities-filled Ballroom to the Attic and out to the Graveyard and beyond in search of spirits. Beware, though, of the Hitchhiking Ghosts, who are notorious for “following you home” as that may spell your doom in the end!

Haunted Mansion: Call Of The Spirits will be available from Funko Games on September 30th.