DC’s Stargirl episode twelve has some unexpected twists, a lot of action, and a cliffhanger like you wouldn’t believe! Cannot wait for what is sure to be an epic finale.

Things are really getting intense is DC’s Stargirl. The last few episodes have had a lot going on, and the cliffhanger we were left with at the end of Stargirl episode eleven left me on the edge of my seat. Courtney and her family are in a lot of trouble since the ISA knows their identity.

My foot was tapping a hundred miles a minute through the “previously on” that felt like it took an hour. But once we got into it, DC’s Stargirl episode twelve is probably my favorite episode. For several different reasons. I cannot wait for the finale next week.

This episode starts off with the ISA going on the hunt for Courtney and her family. Brainwave doesn’t seem to think there is any chance that they will get away or stop them, and he is continuing on with his plan. The countdown starts right off where we last saw it. Brainwave and Icicle are talking about their plans, yet again. That the machine built by Dr. Ito will magnify Brainwave’s power. He will then make sure the whole world shares his values, and thinks like him.

He also mentions that there might be a fight. He doesn’t expect the country to go down without a fight. He mentions that Icicle’s dream will be realized and that his wife would have been very proud of him. His dream for a better society. It seems to me that they are just going to create some mind controlled zombies that could go off the rails at anytime if they stick with that plan but whatever.

Courtney’s Family On The Run

We then cut to Courtney’s family packing up to get out of town. Pat is alone with Mike and it seems like he is finally going to come clean to him. Pat isn’t sure how to explain it all so what better way to start the conversation than by showing him S.T.R.I.P.E. Well, of course him and Mike get in a fight before he can and Mike takes off.

Then Crusher shows up and is ready to take down Pat — remember, he is a member of the ISA after all — Sportsmaster (which Pat is unaware of at first). Crusher tells Pat that he was totally shocked he was S.T.R.I.P.E., he didn’t think he had it in him. They start to fight and meanwhile, Barbara has to deal with Tigress showing up at their house. Looks like the whole Whitmore family is in trouble.

Courtney and the Cosmic Staff show up just in time to help Barbara out. At the same time Pat and Crusher end up going head to head without weapons. Pat holds his own at first, but then things start to not look so good. Lucky for him Mike comes to his rescue!

I gotta admit I really liked seeing the fights in this episode. They were well done and seemed legit. Barbara got to see her daughter in action finally and Mike got to really step in and help out. I was actually really happy to see Mike finally be let in on the family secret. I was starting to worry for him because he was feeling left out of everything.

I loved seeing Mike and Courtney get to finally talk about her having the staff. Poor Mike is a little upset that he didn’t find it first and wonders if it would have chosen him. But then he says that his dad doesn’t have any powers and he still built S.T.R.I.P.E. — and maybe he can do something like that for the JSA sometime. Yeah, my heart melted. Mike is one of my favorite characters.

Since Sportsmaster and Tigress couldn’t take care of the Whitmores, Brainwave calls in the school principal. Remember Pat said she couldn’t be Fiddler because she was a female? Well turns out her husband was Fiddler and she took over when he died. She also has a son, who she is clearly raising to be like her.

While Sportsmaster and Tigress are picking themselves off the floor, she shows up at the Whitmores house. She says that she was sent by Icicle to do the job right. She plans to play the violin and immobilize the JSA to make them easy targets. She then goes on a rant about how they are unfit parents and she is worried what will come of their daughter. Tigress doesn’t take too kindly to this and… well… kills her. Yeah, I didn’t see that coming either. 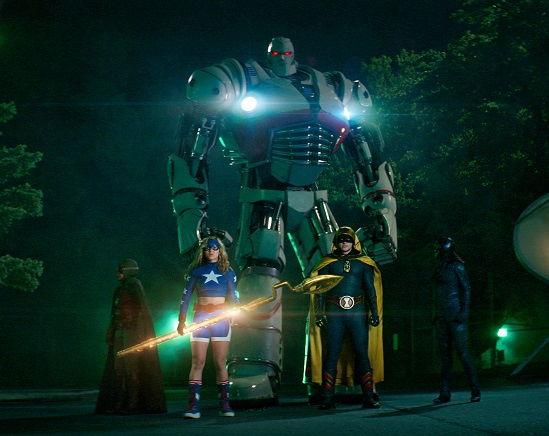 The JSA Vs. The ISA

Courtney and her family head to a safe house and meet up with the JSA there, including the Shining Knight. They all know that the ISA is coming after them and they need a plan — quick. They know about the increase in electrical power and Dr. Mid-nite’s goggles let Beth know Brainwave did indeed absorb Henry’s energy to become more powerful after his death.

Rick gets to work on solving the puzzle of his father’s journal — and Pat helps him out by suggesting the Mustang has something to do with the code. Beth scans the journal and a map of the ISA’s headquarters is projected for them all to look at. They figure out what the ISA are up to and start to come up with a plan. It means they will split up, which every one is concerned about, but it seems like the smartest thing to do.

Meanwhile, Brainwave tells Cindy just exactly what her father, and the rest of the ISA, think of her — that she is just a failed experiment. Yes, she is still locked up in the dungeon area of the ISA and I cannot help but think she will be out of there soon. Brainwave has come to run a test of the machine that Dr. Ito built, which by the way looks so much like Cerebro (Marvel). Like, basically exactly like it. Which I guess makes sense because both machines are similar.

With the JSA all in place now, Beth is able to hack into their system and figure out exactly what the ISA is up to. And boy did it shock me. The thoughts they want everyone to think? They want them to embrace solar and wind power. Not only that, they want to get rid of discrimination. Like against every one. They also want Universal Healthcare. Sure seems like the ISA is wanting to do good things for the world.

Beth also discovers that once started, the process will take thirty minutes. After that, the effects are final. And it only effects fully developed minds — so only adults will be reprogrammed. Apparently there are some that will fight too hard against it, and they will die — they’re brains will shut down. The estimated amount of deaths is 25 million — give or take.

The very last thing we learn is that the process has started already — and we see Barbara, Justin, and even Pat freeze in their tracks. Except Brainwave now has control of them, so he can control S.T.R.I.P.E. WHAAAATTTT… Crazy.

DC’s Stargirl episode twelve has a lot of great action and some unexpected moments. It really is setting the first season up for what is sure to be an epic finale. Both the JSA and ISA are ready for a fight. A big one. The finale one. And I cannot wait to see how it is all going to end.

With the ISA on their trail, Courtney, Pat and the team regroup to figure out their next steps. Meanwhile, Rick makes a breakthrough, and the team prepares for a showdown with the ISA.

[…] ending of the previous episode, Stargirl episode twelve left me with my jaw dropped and staring at the screen. To say that I was dying to watch the finale […]