Transformers: War For Cybertron Chapter One: Siege is a dark & gritty anime that will have OG Transformers fans glued to the screen. Fun cameos and a really decent plot will have viewers begging for more when it ends. 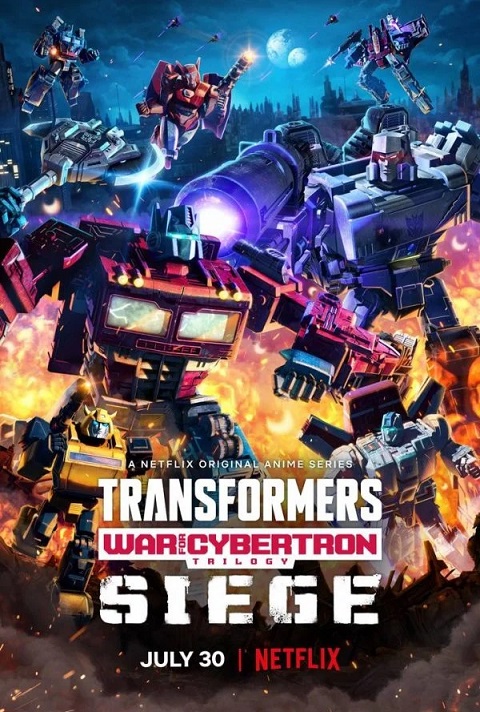 I have always loved Transformers — the shows, the movies — all of it. I watched Transformers when I was young and I love that they are still a thing! Now I share my love for them with my daughters. We all have our favorite and my youngest, well, she is on the side of the Decepticons (mom fail, I know).

All that being said, this new show on Netflix, Transformers: War For Cybertron Chapter One: Siege is not exactly for young kids. My 9 year old daughter loves it, but it was a little too much for my 7 year old. This show is all about the devastation that has come about thanks to the Civil War between the Autobots and the Decepticons.

A Dark and Gritty Show

When I say this show is dark and gritty, I mean it. If you don’t believe me, just look at the image above. Yes, those are the bodies of Transformers on spikes. Crazy. At least with them being “robots” we don’t blood. But we do get missing arms, blown off bits, and more.

Toward the beginning of this six episode series, Ultra Magnus shows up and does the unthinkable. He turns himself into the Decepticons in an effort to bring peace between the two sides and end the war. Of course he ends up being imprisoned and tortured.

Even though we only get six short episodes in Transformers: War For Cybertron Siege, we get a lot of amazing cameos. Bumblebee is one of my favorite characters in Transformers so I was thrilled to see him as a major part of the series.

I do not want to give spoilers but let’s just say at the beginning he is on neither side. Not a Decepticon, not an Autobot. You will just have to watch the show to see if that changes.

There are plenty more favorite Transformers that show up in this series. Not going to lie, my jaw dropped a few times!

Transformers: War For Cybertron Chapter One: Siege is a must watch for all Transformers fans. This is setting up a three chapter series and I cannot wait for more. I think that you will be in the same spot as me when you get to the end of episode six!

This is a dark and gritty cartoon, which makes it pretty awesome. The animation is style is amazing and I often found myself staring at the detail in each scene. Such incredible detail went into this and it is obvious. Of course there is a great voice cast as well.

The plot itself sucked me right in. Seeing the devastation of the war made me feel for both sides (I know, I know). The Autobots and Decepticons are both after the Allspark to turn the tides of the war. Again, I don’t want to give any spoilers but I promise you, fans of the Transformers are going to love what happens!

Transformers: War For Cyrbertron is a super quick binge — only six less than thirty minute episodes. And it more than worth those three hours of your life. I cannot wait for Chapter Two!

It is the final hours of the devastating civil war between the Autobots and Decepticons. The war that has torn apart their home planet of Cybertron is at a tipping point. Two leaders, Optimus Prime and Megatron, both want to save their world and unify their people, but only on their own terms.

In an attempt to end the conflict, Megatron is forced to consider using the Allspark, the source of all life and power on Cybertron, to “reformat” the Autobots, thus “unifying” Cybertron.

Outnumbered, outgunned, and under SIEGE, the battle-weary Autobots orchestrate a desperate series of counterstrikes on a mission that, if everything somehow goes right, will end with an unthinkable choice: kill their planet in order to save it.