In Thor: Love and Thunder Jane Foster will be picking up Mjolnir to become Mighty Thor! Here are 5 comic books to read to get to know this female Thor. 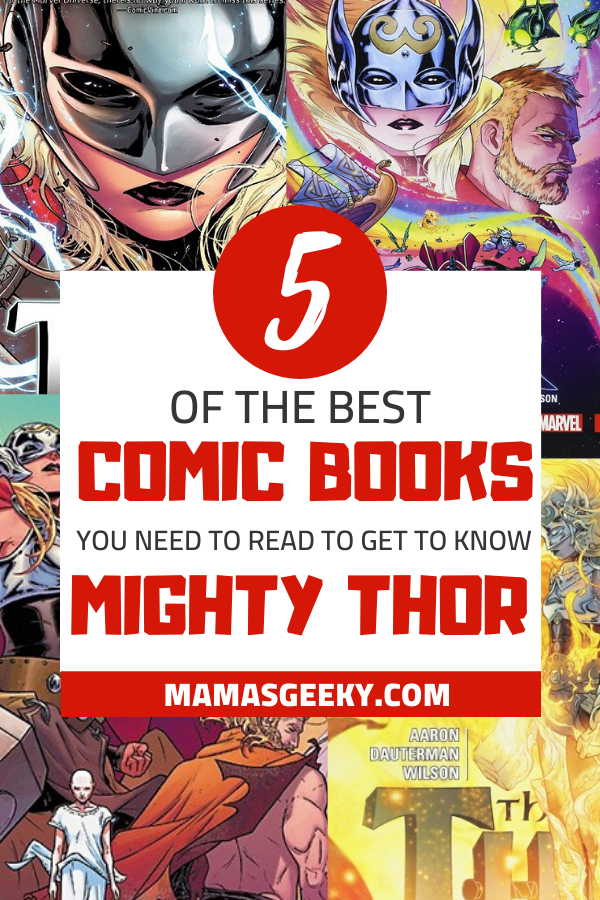 In case you are living under a rock, it was announced at San Diego Comic Con that Natalie Portman is back as Jane Foster in Thor 4 — as Mighty Thor! Yes, she will be wielding Mjolnir in the film and I am hyped about this. Jane always bored me in the comics (and the MCU) until I read this story line. She actually was pretty badass as Mighty Thor, and let’s hope Natalie can pull it off! Jane overcomes a lot — and I mean A LOT — to be worthy of Mjolnir. 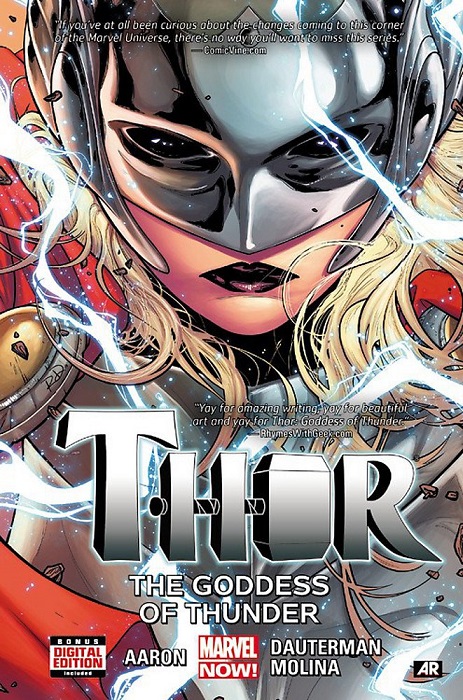 Thor: The Goddess Of Thunder

Mjolnir lies on the moon, unable to be lifted! The secrets of Original Sin have left the God of Thunder unworthy for the fi rst time! But when Frost Giants invade Earth, a new hand will grasp the hammer – and a mysterious woman will take up the mantle of the mighty Thor!

Who is this new Goddess of Thunder? Not even Odin knows…but she may be Earth’s only hope against the Frost Giants! Get ready for a Thor like you’ve never seen before, as this all-new heroine takes Midgard by storm! Plus: the Odinson doesn’t like that someone else is holding his hammer…and now it’s Thor vs. Thor! 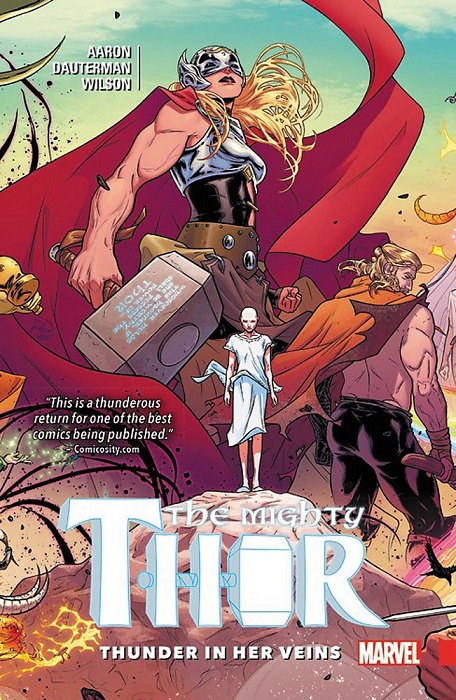 The Mighty Thor: Thunder In Her Veins

Dr. Jane Foster is the Goddess of Thunder -and it’s killing her. Her enemies are many as Asgard descends further into chaos, and unrest threatens to spread throughout the Ten Realms. Yet she wages her greatest battle against a far more personal foe: the cancer killing her mortal form. When Loki steps back into Thor’s life, will it ease her troubles or only add to her pain?

There’s no such question about Malekith as he continues to fan the fl ames of a looming War of Realms – when he isn’t wedding planning, that is! And as Asgard is torn apart, the skies will shake in one of the bloodiest battles of all time: It’s Thor vs. Odin like never before!

The Mighty Thor: Lords of Midgard

The legend continues with Thors new and old! Loki spins a special ages-old tale of a young Odinson in action against a hulking great enemy. You wouldn’t like this Viking when he’s angry! But what incredible impact will this yarn from the past have on the present? Prepare for corporate espionage, Marvel-style, as some of the world’s most powerful and evil conglomerates go to war — with Thor caught in the middle! But if Roxxon and the rest aren’t enough trouble, Jane Foster must contend with a new enemy: S.H.I.E.L.D.! Whose side will Agent Roz Solomon be on? Worse still, somehow millions of lives will depend on the God of Thunder saving Roxxon’s evil executive, Dario Agger! All this and…the Exterminatrix and the Silver Samurai?!

The Mighty Thor: The Asgard/Shi’ar War

Two of the Marvel Universe’s mightiest races are on a collision course – but first, Thor must deal with the escalating War of the Realms! To face Malekith, Loki and an all-new Kurse, she’ll need a team of her own. Prepare for the triumphant return of the League of Realms! Far across the galaxy, though, another conflict is brewing – as the most powerful super-army in the cosmos prepares a surprise attack on the city of the gods!

The Shi’ar Empire will lay siege to Asgardia – and their target is the Goddess of Thunder! But why? And what does the fate of Midgard have to do with it? And where the Shi’ar go, the Phoenix Force tends to follow – which is bad news for Thor! Maybe the returning Odinson could lend a hand – or perhaps, Quentin Quire?!

The Death of Mighty Thor

Marvel Legacy hits Asgard with a bang – the death of the Mighty Thor! The final judgment comes as the Mangog arrives. The War Thor meets the beast head-on, but even the bloodthirst of this Ultimate hammer-wielder may pale in comparison to the Mangog’s might! The battle rages as Jane Foster’s cancer takes a turn for the worse, and she might not have to wait for the final judgment at all.

The clock is ticking, the War of the Realms is spreading, and Mjolnir cannot save her this time. Can even the legendary Hercules help avert disaster? It’s the beginning of the end – one that will lead to the most dramatic finale in the Marvel Universe. The tragic and heroic story of Jane Foster finally reaches its heart-rending zenith!

About Thor: Love and Thunder

The fourth “Thor” film, titled “Thor: Love and Thunder,” will be released on February 11, 2022. Chris Hemsworth will return as the titular character, Tessa Thompson will be back as Valkyrie, and Natalie Portman will reprise her role as Jane Foster.

I am sure that Taika Waititi will do good by her, he is a brilliant man after all. Hands down one of my favorite directors.