Judy & Punch is a must see dark and twisted comedy. A different take on the original story makes it fun to watch because you don’t know what happens next.

if you love dark and twisted stories like I do, then you are sure to love Judy & Punch. What intrigued me about this movie is that it was supposed to be a new twist on an older tale. I expect that it might be a small twist, but they really came through with making a dark story, even darker. This movie dives into the deep abyss of Judy and Punch, and takes it a few steps further than you might ever imagine.

If you don’t know the story of Judy and Punch, allow me to briefly tell you. It is a puppet show that has roots back to the 16th century. While there is not just one story that the show followed, the show is pretty violent. Long story short, Judy leaves their baby with Punch, who beats it and kills it. When she returns she is so upset that she starts to hit him a stick. He takes that stick and in turn beats her to death with it.

As the show goes on he does the same to a police officer, ghost, hangman, and even the devil himself. Of course this show has very much changed now, but you get the idea. Lots of violence, hitting, and even murder. All surrounded by singing and laughing. Interesting.. isn’t it? 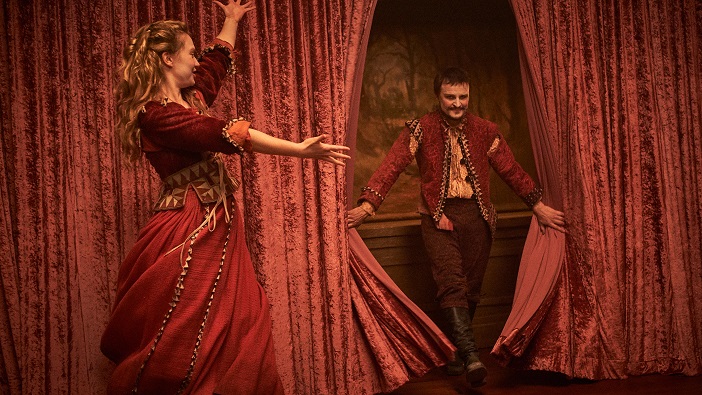 The Dark Twists Of The Film

It seems like this story is already dark, so how can it get any darker? Well for starters, Judy and Punch are not puppets. They are the puppeteers. Which is honestly an interesting way to tell the story, and I really didn’t think it was going to work. But boy, does it work.

I am absolutely obsessed with how female led this version is. Judy may come off weak at points, but she is a strong woman and that is proven several times over. She makes me want to let my young daughters watch this movie. But not yet. Not for some time. Eventually though…

I love dark comedies and thriller movies and that is exactly what Judy & Punch is. There were moments where I gasped — and then started laughing because I wasn’t sure what else I was supposed to do. The fact that something so horrible could happen, and I would bust out laughing, just shows how perfectly balanced this film is.

When you sit down to watch this movie, and you absolutely should, get ready to have your mind blown as you weave through the dark and twisted plot. Just when you think things can’t get any more bizarre, and at the same time amazing, the final scene hits you like a gut punch. And you will likely just laugh until you can’t anymore.

Judy & Punch is a movie that is sure to surprise you. When you are heartbroken one second, and laughing the next, you know it was done well. That is a hard balance to find, and it finds it.

Mia Wasikowska and Damon Herriman are absolutely superb in this film. They both shine when on the screen and are so perfectly dark and creepy that it really, really works. I believed them without hesitation. And when I see them in other films in the future, I have a feeling I will always think back to how well they performed in this one.

Yes, they have both done other things. Notable things. But they are no longer Alice and Dewey to me — they are Judy and Punch.

In the anarchic town of Seaside, nowhere near the sea, puppeteers Judy and Punch are trying to resurrect their marionette show. The show is a hit due to Judy’s superior puppeteering, but Punch’s driving ambition and penchant for whisky lead to an inevitable tragedy that Judy must avenge.

In a visceral and dynamic live-action reinterpretation of the famous 16th century puppet show, writer director MIRRAH FOULKES turns the traditional story of Punch and Judy on its head and brings to life a fierce, darkly comic and epic female-driven revenge story, starring MIA WASIKOWSKA and DAMON HERRIMAN.

Read more of my movie reviews.