We can’t be the only ones looking for more family board games to play right now — so I want to tell you about a new favorite, Disney Villainous! 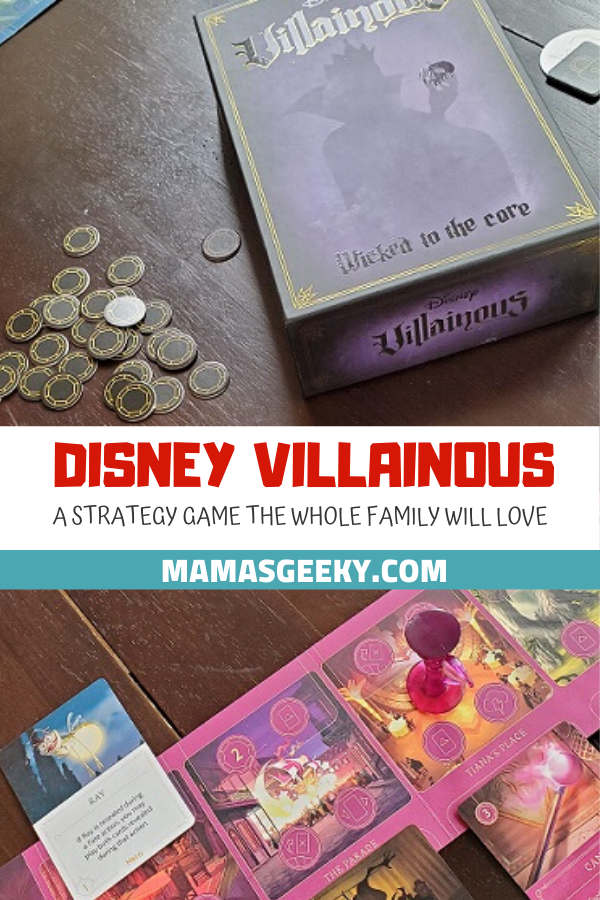 We are massive Disney fans in our house, which you probably know if you know anything about me. With the kids being home, we have been looking for more to do together as a family. While on the search for new board games, I discovered Disney Villainous and almost immediately ordered it. Disney Villains and gaming combined into one board game? Yes please!

There are several different options you can purchase. The “main” game comes with six villains, and the “expansions” come with three each. I put them in quotes because you don’t need the main game to play. You can easily play Disney Villainous with just the expansion packs, but only with three players (or teams).

Each villain has their own board and objective they need to complete in order to win. For example, Captain Hook needs to defeat Peter Pan at the Jolly Roger, and Dr. Facilier needs to control New Orleans. Once someone completes their objective, the game is over. But there is so much more to that.

Sure, everyone is kind of playing their own game, but you also have to look at the other players to make sure they don’t win before you do. Use the Fate deck to slow their progress.

What We Love About Disney Villainous

There are a lot of things that I love about Disney Villainous. It has quickly become one of our favorite game s to play as a family, if not our favorite.

Personally, I love the variety in it. I can be any of twelve different villains, and each villain is totally different. They each have their own game board and decks of cards. That means each time that you play, you can have a totally different experience. If you choose to want to master a villain, that can be fun too. Just play the same one over and over and you can get a good strategy down that ensures a win. 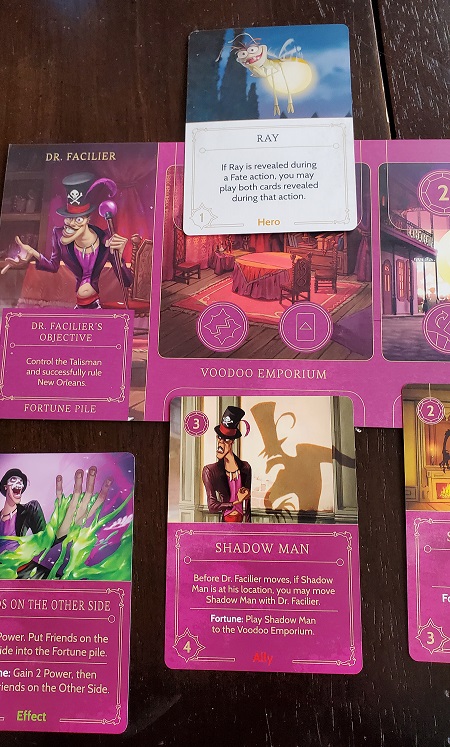 If you feel like you are getting close to winning, or someone else is, you can use the Fate deck to hinder them. This deck has heroes and other cards that can cover up available actions for each villain, and make it difficult for them to move toward their objective.

Something else we love about this game is how it brings our favorite Disney movies and characters to life. The cards all reflect the different villains and their movies, which is so fun! In fact, we have watched lots of Disney movies after playing a round of Villainous because it reminded us how much we love it.

Is It Too Difficult For Young Kids?

Disney Villainous is recommended for ages 10 and up, however, my 7 and 8 year old love this game. Sure, it helps that we around to read or explain cards when needed, but they get the hang of the game themselves. The first time we played, they played on a team together, but now they each take their own villain and play!

The hardest part for them is getting the strategy down because they REALLY love to Fate each other before focusing on their own objectives. But they are starting to figure that out and my youngest even won the last time we played!

Certain villains are easier than others – like Queen of Hearts and Dr. Facilier. Others can be more difficult like The Evil Queen and Hades. The more you play, the more you will get in the groove of things.

One game usually takes us about forty minutes to an hour to play.

Playing as favorite evil-doers like Maleficent, Ursula, and Captain Hook, players will take on the role of the Disney Villain and plan their schemes methodically in the way of their Disney Villain to reach their objective before everyone else. Set traps, wield curses, leverage your allies, and most importantly, be cunning!

Five RPG Board Games The Whole Family Will Love