Blue’s Clues & You is finally here — and in the latest DVD you not only get introduced to the new show, you meet the new host, Josh!

I grew up watching Blue’s Clues, so when I heard there was going to be a new show, I was thrilled. I have vivid memories of making up a game to play at home, where we placed Blue’s paw prints around the house and guess what Blue wanted to do. It would provide hours and hours of fun.

When I had kids of my own, I introduced them to the same game and showed them old episodes of the show. But now that there is a new version, we are watching those together. One of my favorite things about it is that they have introduced some ASL (American Sign Language). And now my girls are learning something I never did thanks to it!

We have had so much fun getting to know the new host, Josh. And even were lucky enough to interview him last week (stay tuned for more on that later). My girls were thrilled to be able to ask him all of their burning questions, so it was a great experience. And just made us love this show even more! 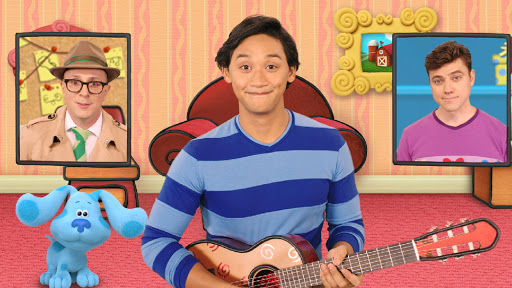 About Exclusive This DVD

In the this exclusive DVD collection, fans can help Josh solve games of Blue’s Clues as he tries to figure out what Blue wants for a snack, what present she wants for her birthday, what she would like to do on her playdate and more. The DVD will also include special episodes from Josh & Blue’s VLOG and eight bonus American Sign Language flashcards.

This exclusive DVD will be available on DVD June 2nd exclusively at Walmart!

Enter to win a copy of Blue’s Clues & You! on DVD using the Gleam form below. Check out my other giveaways while you are here and GOOD LUCK!