If you have not watched the Hulu Original Series Into the Dark, you’re really missing out! The newest one, Pooka 2: Pooka Lives!, is so creepy (& so good!). 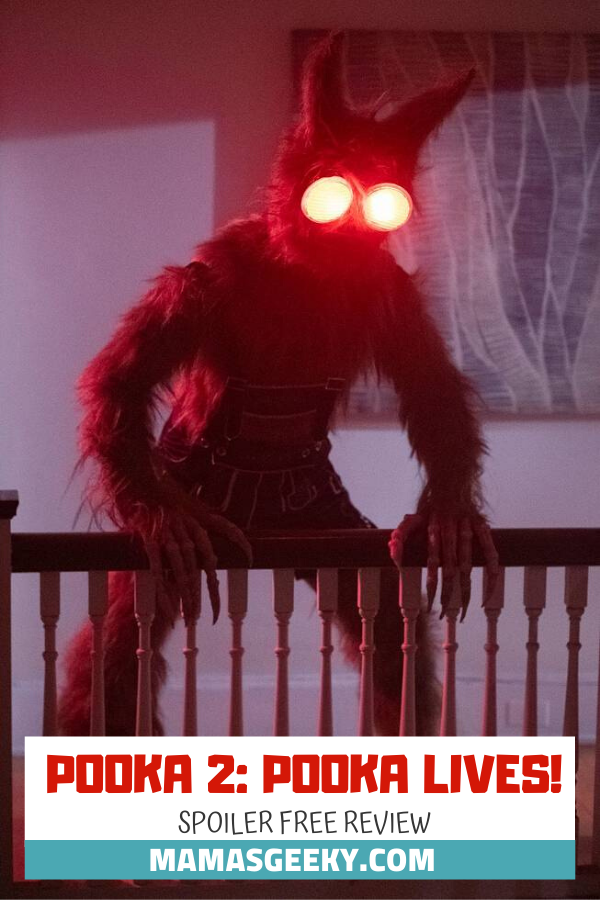 If you haven’t been watching Hulu’s Into the Dark series first of all, you are missing out on a fantastic horror show. Second of all, let me quickly explain the first Pooka to you. Pooka is a lovable kids toy whose eyes turn blue when he is nice, and red when he is feeling mischievous. A man is hired to play Pooka in a toy store and he goes a bit…crazy to say the least. I don’t want to spoil it so just do me a favor and watch it. It is fantastic. Especially if you like creepy.

Remember, if you don’t already have Hulu, you can get it along with Disney+ and ESPN for just $12.99 a month! Click here to order.

Pooka 2: Pooka Lives! starts off at the house of the lady who designed Pooka and she is just a little bit crazy too. Then we jump a year and follow Derrick, who is a writer and has just gotten a position as a copy writer Pooka, which is also a show as well as a toy. The company is working on a redesign of Pooka — trust me, that is important to know.

He has left NYC and headed home to Spring Valley because of a book he wrote about online personalities. One of the influencers – Jax – was not happy about what he said and told his following to attack him on social media. Derrick’s career was ruined because of this, and that is why he had to leave NYC.

The Dangers Of Social Media

While home he reunites with his friends from High School and they come up with the idea to create an internet challenge, that goes viral like they would never expect. Their challenge? Summon Pooka by doing some crazy things to see if you have been naughty or nice. If you are nice? Nothing will happen. But if you are naughty? Pooka will come after you. Of course things really get out of hand, as most things on the internet do. That is where I will stop explaining the plot of Pooka 2: Pooka Lives! because I really don’t want to give any spoilers.

What I really loved about this episode was how it shines a light on the dangers of social media. They even mention Momo (I hate that thing). We all know the dangers are there, we just mostly try to ignore them. Challenges often blow up and take over the internet, before dying just as fast as they started. Many of these challenges cause kids to harm themselves (often unintentionally). In Pooka 2 they discuss a marble challenge where kids (and adults) were eating marbles.

Is It Creepier Than The First One?

I loved the first Pooka so much because of how creepy it was. Was this one creepier? I sure think so. The first one had more of a suspense aspect, where this one went right for the creepy. I suppose it is a different kind of creepy, but that didn’t make this one any less awesome.

About thirty minutes in it starts to get REALLY good. That is after the challenge has been created and internet users start actually doing it, including Jax. From then on you will not believe your eyes!

Is this a perfect movie with a complex plot? No. I love crazy murders and movies that keep me on the edge of my seat — so this is hands down a must watch for me! If you enjoy the same, I think you will really like Pooka 2: Pooka Lives! too. But trust me, watch the first one before watching this. While you definitely don’t have to, it will give you more of a background on Pooka.

Pooka 2 is not as good as the first one, but it is a whole different level of creepy (in a good way). It not so subtly touches on the dangers of social media challenges in the perfect way.

A group of thirty-something friends from high-school create their own Creepypasta about Pooka for laughs, but are shocked when it becomes so viral on the Internet that it actually manifests more murderous versions of the creature.

About Into The Dark

In partnership with Blumhouse Television, Into The Dark is a monthly horror event series from prolific, award-winning producer, Jason Blum’s independent TV studio. Each feature-length installment is inspired by a holiday and features Blumhouse’s signature genre/thriller spin on the story.

Looking for more binge worthy series you can stream? I got you!