I could barely get through Playmobil: The Movie without falling asleep, but my two young daughters loved it — so that has to say something, right?

Playmobil: The Movie is basically just one long commercial trying to showcase all that this brand has to offer when it comes to toys. Arming itself with a strong voice cast, I was a bit surprised at how bad this movie really is. I struggled to get through it, and often found myself fighting to not doze off. However, I watched it with my seven and eight year old daughters who absolutely loved it.

They were engaged throughout the whole movie and even kept nudging me to make sure I didn’t miss parts of it. Although I could barely pick out a plot, they found one (and told my husband the whole story later that night). When it ended, they asked if they could watch it again. That is something they rarely do when it comes to movies, so that has to mean something, right?

All Over The Place

I admit I tried – I REALLY tried – to understand this movie, but it was just a mess. The script was all over the place and it felt like there was no plot at all. Kids were sucked into the Playmobil world, and go on, I guess what you could call adventures. To me it was very obvious the point of those were to show viewers all the toys that Playmobil has to offer.

My girls have several Playmobil sets, and they love playing with them. So they really enjoyed this movie. I could not get into it no matter how hard I tried. I couldn’t even tolerate it in all honestly. It was too all over the place and made absolutely no sense to me. 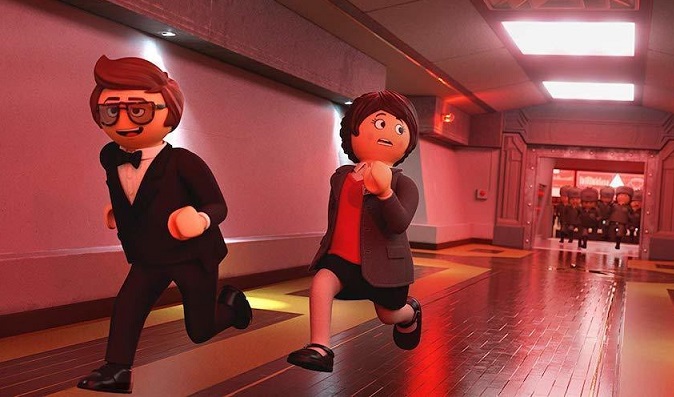 I feel like Playmobil tried too hard to recreate the LEGO movies, which are infinitely better than this. My kids are hoping for sequel — while I am praying there isn’t one.

About Playmobil: The Movie

Maria and her younger brother Charlie find themselves magically transported to the fantastical world of Playmobil. While there, they encounter robots, Vikings, knights, pirates and other colorfully amusing characters. But when Charlie winds up in the clutches of an evil emperor, Maria joins forces with a bumbling secret agent and an adventurous truck driver to rescue her beloved sibling.

Playmobil: The Movie is available to bring home now.