My daughters, who are 7 and 8, are big fans of the Disney Junior Gigantosaurus TV show. So when they found out there was a video game with their favorite characters, they were thrilled! I was offered an advance copy and I know they would have never let me live it down if I declined, so I downloaded it right away for them!

Since unfortunately we are stuck indoors for a while right now, they had plenty of time to play it. I let them explore the world of Gigantosaurus The Game for hours on end — and hearing them giggle as they played together was music to my ears.

Gigantosaurus allows four player couch co-op, which immediately puts it on my list of favorite family friendly games. This means that the whole family can play together — and there is nothing better than cuddling on the couch with my husband and daughters to play video games. Even if it is a kids game.

For a kids game, Gigantosaurus The Game is actually a lot of fun. My favorite part is the racing aspect — but I have always loved a good racing video game. My daughters would spend all their time exploring the island if they could. If you are a family that loves video games, then this game is a great way to bring your family together right now.

You are sure to have some laughs, and a lot of fun, exploring this game together as a family. It is easy for players to jump in and out, which I thought was perfect. For example, I was playing with my daughters and then had to start dinner. Instead of making them pause, or having my character just sit there, it wasn’t a big deal for me to exit the game and allow them to keep playing.

Explore and race across the prehistoric world of Gigantosaurus. This Disney dino tale is part saving the world, part super race, and all giant fun! Rocky, Tiny, Mazu and Bill have scary problems like the meteor that’s blocked up Giganto’s volcano!

Only you and your dino friends can dare to solve puzzles and save the day but you might need Giganto’s powers too! And the end of each story is the start of a super rally to the next zone. Will you be the most roarsome adventurer or the fastest racer? 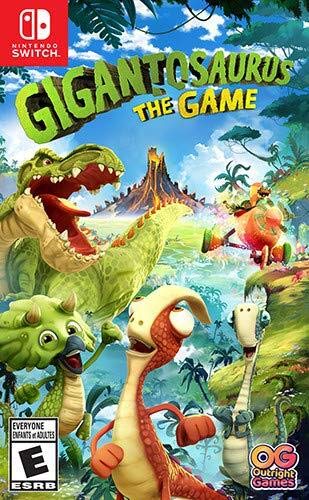 Gigantosauraus The Game will be available on Nintendo Switch, Xbox, PlayStation, & PC on March 27th.

If your kids love Gigantosaurus as much as mine do, they are sure to love this dinosaur craft featuring their favorite character from the show!