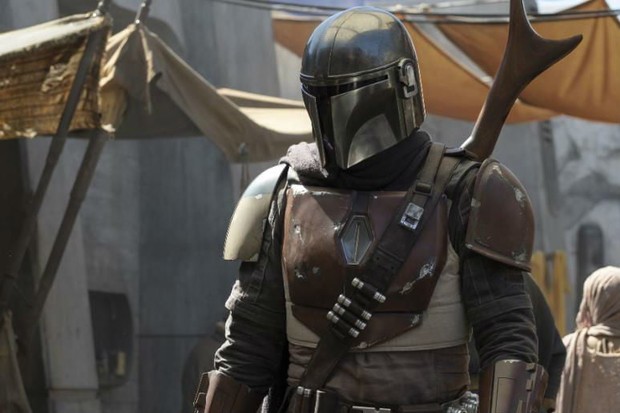 The calculated way that The Mandalorian says this just shows how badass he is. He is a bounty hunter and he can either take in his bounty alive, or dead. He leaves it up to his bounty, and I kind of love how he did it. Of course the guy decides to go with him alive.

“He said you were the best in the parsec.”

Some might say this is him being cocky — but I say it is him having confidence. Han Solo may not have wanted to know the odds, but clearly The Mandalorian doesn’t care. And from what we have seen of him fighting, he could have taken 4 out pretty easily.

“You are a Mandalorian. Surely you can ride this young bull.”

It was strange to see The Mandalorian doubt himself for a few minutes about riding a Blurrg. But then the next scene shows him not giving up and learning to do it. Which shows how determined and strong he is.

“Do not self destruct. We’re shooting our way out.”

As if this line isn’t badass enough, The Mandalorian then jumps on a rotating blaster and shoots so many people. He and IG-11 were surrounded and he made short work of them. Amazing. I sure would like to have him on my side in a fight.

This part had me cracking up. I especially love that the baby totally ignored The Mandalorian and ate the frog thing anyways.

“I did disintegrate a few of them.”

“I’m A Mandalorian. Weapons are a part of my religion.”

Boom. Mic drop. This is why I love Mandalorians.

“I’m not gonna trade anything. These are my parts. They stole from me.”

Standing his ground with the Jawas. I like it.

“Do you understand this?”

And then the flamethrower. Love it.

I think The Mandalorian makes a pretty good team with that adorable baby.

“What are your plans for it?”

Ohhhh…. looks like The Mando caught some feelings for The Child! I mean, how can you blame him? However, it is pretty badass of him to break guild code and ask.

“Our secrecy is our survival. Our survival is our strength.”

This quote comes from this new character – a badass female Mandalorian that I cannot wait to learn more about.

“When one chooses to walk the way of the Mandalore, you are both hunter and prey.”

Another badass quotes from this new Mandalorian.

“They work for the Empire. What are they doing here?”

The Mando just cannot let it go. Thinking about The Child and wondering what his fate will be. What ensues is insanely badass. He goes off the rescue The Child. Against the Guild. Against the code. Seems like he has a heart. The scene of him walking through the door, holding The Child, with dead Stormtroopers around him? EVERYTHING.

“Here’s what I’m gonna do. I’m gonna walk to my ship, with the kid. And you’re gonna let it happen.”

This line never gets old.

“Unless we show them how.”

The Mandalorian is willing to train an entire village. Heck yes he is.

“You got two problems here. You got the bandits and you got the mech. We’ll handle the AT-ST. You gotta protect us when they come out of the woods. And I don’t have to tell you how dangerous they are.”

The things he is willing to do for this village kind of warms my heart.

“You just can’t ever put it back on again.”

Don’t do it Mando!

Mando if you leave that adorable Child behind… listen. I need more of him. I won’t get over it. This is probably the first of The Mandalorian quotes that made me MAD.

Cue all the tears. I am not OK with this!

“Keep them away from my ship.”

“Well, good luck with that.”

“Bring two speeder bikes, and give me the tracking FOB.”

The Mando is willing to trade anything when necessary.

Without hesitation. I love him.

“That’s not saying much.”

I just love his attitude.

Now Baby Yoda is a pet?!

I love when The Mando turns someone’s words against them.

“No, I don’t want that droid anywhere near him.”

“I got a thing for THAT droid.”

“That droid was designed to kill things. I don’t care how much wiring he replaced, it goes against his nature.”

Some of my favorite badass The Mandalorian quotes come from the final episode of the season. It also made me hate Jason Sudeikis — so there’s that.

“I wasn’t born on Mandalore.”

“They raised me in the fighting core. When I came of age, I was sworn to the creed.”

“Let me have a warrior’s death. This is the way.”

“I’d rather you kill me than some imp.”

“No living thing has seen me without my helmet since I swore the creed.”

“You expect me to search the galaxy for the home of this creature and deliver it to a race of enemy sorcerers?”

As the season goes on, I plan to add more and more badass The Mandalorian quotes. If you think there are any I should add, let me know!