There was never a dull moment in the re-imagined Lady and the Tramp. In fact, I found myself looking forward to seeing moments and songs that I knew were coming. And honestly, I did not expect myself to cry this much. I mean, I expected to shed tears. But I didn’t expect the ugly cry. There were many differences to the original animated version — but that is a good thing.

At first I was a little skeptical about the re-imagined Lady and the Tramp that is coming to Disney+ at launch. Why? Well I am a such a fan of the original animated version and I just wasn’t sure it needed to be redone. But honestly after watching the live action remake of Aladdin, I had a lot more confidence in it. I loved Aladdin, and I felt like it was perfectly cast. Lady and the Tramp? Well I am happy to report it followed in Aladdin’s footsteps.

Like I said, there are many differences from the animated version in this newly re-imagined Lady and the Tramp for Disney+. I enjoyed the subtle nods to the classic, and most fans will. One of my favorites was when Jock (who is now female) mentions she hopes she breaks a leg to Trusty. A very obvious difference is that Jim Dear and Darling are an interracial couple in this version. I absolutely love that this was done because I think it is important to normalize that in the eyes of children.

I will say I missed the beaver — but the way he was done in this movie just made more sense. Besides, I don’t think you can train a live beaver to bite a muzzle off a live dog… Now, I do not want to give any major spoilers, but there are several other changes that were made. And honestly they were all done for the better. However, the classic is still a classic, and one that I love. I think Yvette Nicole Brown said it best in our interview, “The classic isn’t going away.” There really is room in our hearts for both.

This movie being on Disney+ means I can skip forward to my favorite songs, and sing and dance around the living room with my daughters. And that, well that is something that I will cherish. The animated version has some of my favorite Disney movie songs — He’s a Tramp, Bella Notte — and I think that Is what I was most nervous about. I was afraid they would ruin these songs that were such a major part of my childhood. But they didn’t. They were both perfectly done.

Of course The Siamese Cat Song was cut, and a new song replaced it. This song made much more sense, especially in that moment. And I think that was a welcome change. And the cats? Perfectly creepy in every way!

This Cast Brings It!

The entire cast of this film really impresses. I believed them when I watched Lady and the Tramp. I was transported to that time and invested in the story. There is no way you can’t be impressed with the voice acting. These aren’t CGI animals, they are real dogs. And the fact that I could believe they were talking to each other, says a lot. Sometimes I think voice acting can be harder than live acting — with no body language to back it up. Bravo cast, bravo.

Get Ready To Cry

Cue the tears guys, cue the tears. Like I said before I expected to cry. But I did not expect to be a mess like I was. Lady and the Tramp was much better than I ever expected it to be — and I had really been looking forward to it. I was pulled in to the story and even though I was pretty sure I knew where it was going, I couldn’t help how it made me feel. This movie touched my heart. And made me want to hug my fur babies just a little bit harder.

Watch It Whenever You Want!

If I had to choose, my favorite thing about the new Lady and the Tramp is that I can watch it over and over with Disney+. It isn’t like I have to go to the theater time and time again, and then patiently wait for it to arrive on Blu-ray. 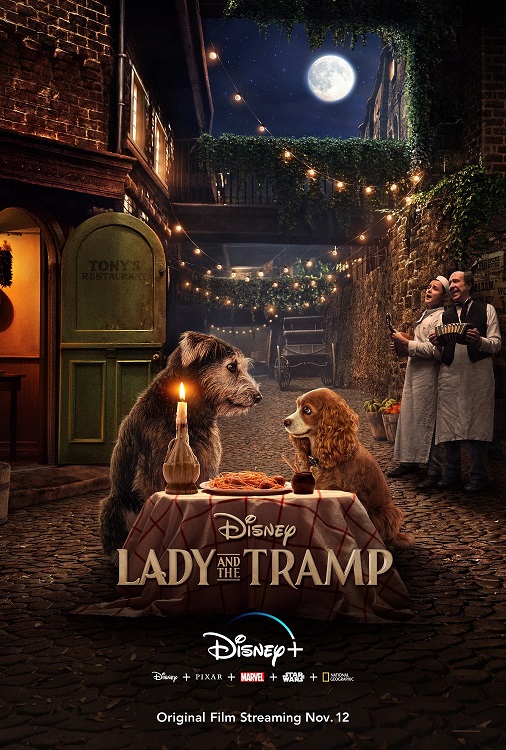 The re-imagined Lady and the Tramp has been updated for the present, but holds on to that magic of the past. It is still set in the same time period, but things are just a little more acceptable. A controversial song has been cut and the movie features an interracial couple. And those aren’t bad things.

Sure some parts are scary. The rat — who scared me as a child in the classic version, might be a bit scary for young kids who are sensitive. But he is on the screen few and far between. Of course Aunt Sarah is … Aunt Sarah, however Yvette Nicole Brown humanizes her perfectly (yes, I felt bad for her).

I hope this movie makes you hug your fur babies tighter, and show them that even if your world gets bigger, they are still an important part in it. Updated for the present, but still with the magic of the classic, this re-imagined Lady and the Tramp is more than worth watching.

About Lady and the Tramp

Watch Lady and the Tramp only on Disney+ — November 12th!