Avengers: Endgame is going to be hitting theaters THIS MONTH – and the hype is REAL guys! I cannot wait to see this movie on the big screen. I need closure! Of course we have yet to see too much, but as I mentioned in my Endgame trailer two breakdown and Endgame special look breakdown – we do have some information. However, I live by the motto never trust the Russo Brothers, so who really knows what we will see. As an avid comic book reader, I am going to do my best to prepare with the 5 comics you should read before seeing it. But since we haven’t really gotten any information on where the story is going, this is all speculation at this point.

These first three are comic books I suggested you read before seeing Avengers: Infinity War as well because, let’s face it, these two movies are tied together. They will give you a background of what happened with Thanos in the comic book world, compared to the MCU.

It’s the Avengers, the New Warriors, the X-Men and more against the omnipotent Eternal, Thanos! The Mad Titan has become the most powerful being in the universe, and enslavement or destruction may be the only choices he gives it! The successive Starlin sagas that shook space and time start here!

After Adam Warlock’s return in Infinity Gauntlet, his worse half the Magus wasn’t far behind! The struggle for ultimate power over the universe continues when a stockpile of evil twins overwhelm the Fantastic Four, Avengers, X-Men, New Warriors, Alpha Flight and more! Will the universe be saved, destroyed… or both? 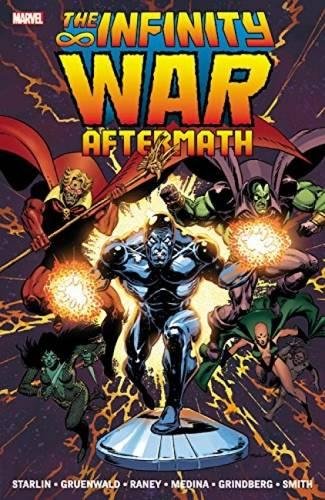 The Infinity War is over – now continue the story with Warlock and the Infinity Watch! Can a comatose Adam overcome his identity crisis and put himself back together again? If he does, Silver Surfer has a favor to ask -one that would pit Warlock against Mephisto for the soul of Surfer’s love Shalla-Bal! Plus, there’s the battle that green ink was invented for: Drax the Destroyer vs. the Incredible Hulk! Meanwhile, Quasar battles for the title of Protector of the Universe – and his very life; Pip the Troll battles a resident of Monster Isle, the deadly Gamora confronts the U.N. – and don’t miss a very Thanos Christmas!

What does Infinity hold for the Marvel Universe? As the Infinity Stones come to Earth, so too comes the war for control over them. But none who wield the stones truly understand the power they contain…or comprehend what it would take to bring them to their end! The nature of the cosmos itself hangs in the balance as we learn the answer to the question on everyone’s lips: Who is Requiem? The
ramifications of this story will be felt throughout Infinity for years to come! As cosmic war begins to rage, Gerry Duggan and Mike Deodato Jr. gaze into the Infinite – and bring the truth to
light!

Through the years, The Avengers have always found a way to reach victory — no matter the odds, no matter the sacrifice. But now, Earth’s Mightiest Heroes face a different find of menace. A menace so great, it has made allies out of sworn enemies. This seemingly unconquerable enemy is … the future! Seven time-lost Avengers–plucked from the past, present, and future–must protect their longtime ally Rick Jones from death at the hands of Immortus, the Master of Time. To find out why Rick has been targeted for elimination, the Avengers must join forces with Kang the Conqueror, one of the team’s deadliest, most implacable foes n a cosmic battle that stretches from the Old West to the End of Time. As they do so, they discover they’re fighting not just for one life, but for the very destiny of mankind–against a greater foes than they could possibly imagine.