The Incredibles has been one of my favorite movies, right from the moment it came out. Because of this, I was so excited about Incredibles 2. In case you missed it, I actually went to the Pixar campus to learn all about the ins and outs of making Incredibles 2. Now it available to take home on digital (blu-ray November 6th) just in time for Halloween. To help celebrate this incredible holiday (see what I did there?), I am going to show you how to make your very own Incredibles pumpkin. Plus some other super fun ways to celebrate Halloween – Incredibles style! 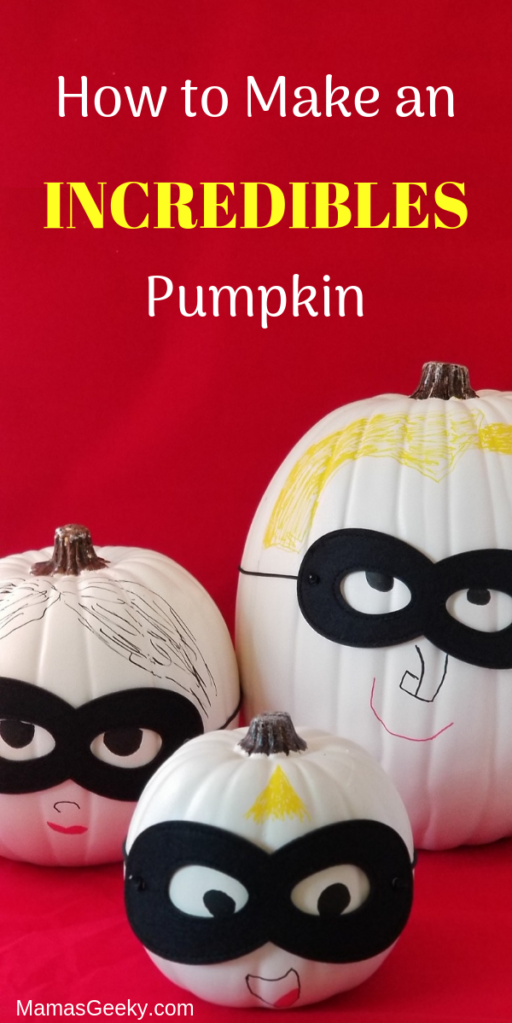 I have made a few themed pumpkins this year, including a really cool Bomberman one, and so I was really excited to try my hand at another one.

To make your pumpkin look INCREDIBLE, simply slip on the superhero mask. Add a face with the paint pens – don’t forget the pupils! I used the coloring pages to get an idea of what the different faces looked like. If you wish to decorate with the stickers and stamps, go for it! My girls covered the backs of their pumpkins with them and it was super adorable.

I have said it several times, but The Incredibles are a great family costume idea! You can go super simple with red shirts with I’s on them, or grab some full costumes. Take a step further and venture out of the Parr family and portray Frozone or Edna! My 7 year old LOVES Edna – she is her favorite character in Incredibles 2. So she was thrilled that our special Incredibles 2 Halloween box included an Edna costume. Doesn’t she look fabulous, darling?!

The box that Pixar sent us also included some delicious recipes! Bob’s Incredible Waffles, and Baby Jack-Jack’s Cookie Num Num Recipe. They even threw in some candy – yum! These cookies are easy to make and totally something we will bake again and again.

No themed activity day is complete without printable coloring pages! These Incredibles 2 coloring pages are something we have printed tons of. My girls have each colored at least twenty copies since the movie came out. There is one for each of the Parr family – which one is your favorite?

In ‘Incredibles 2‘, Helen is called on to lead a campaign to bring Supers back, while Bob navigates the day-to-day heroics of ‘normal’ life at home with Violet, Dash, and baby Jack-Jack whose superpowers are about to be discovered. Their mission is derailed, however, when a new villain emerges with a brilliant and dangerous plot that threatens everything. But the Parrs don’t shy away from a challenge, especially with Frozone by their side. That’s what makes this family so Incredible.

Incredibles 2 was one of my favorite movies all year. It really taught me a few things about parenting that I needed to learn. I highly recommend it for families with kids of all ages. I think everyone has something to learn (and something to enjoy!) in this film.