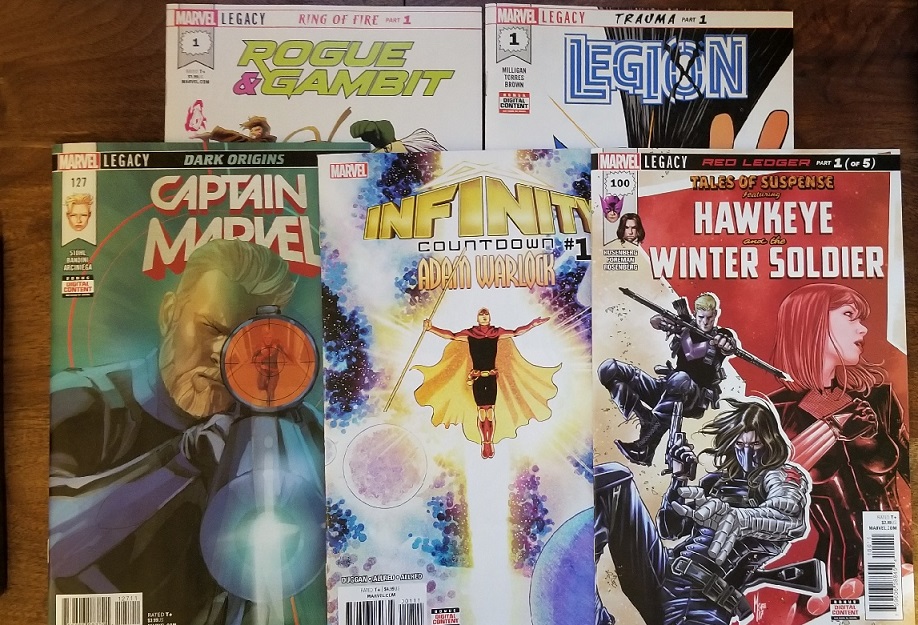 As I am sure most of you know, I am a HUGE Marvel comic book fan. Before I had kids, I was subscribing to at least 40 comic series a month. Once I had the girls, I had to cut back – it wasn’t even a money so much as a time thing. Recently, I started picking up more and more series. These are my current favorites that I think EVERY Marvel fan should be reading. If you have a favorite that is not on this list, please let me know. I am always open to adding more Marvel series to my list.

I adore Rogue and Gambit. They have always been one of my favorite comic book couples – if not my favorite. I even have a tattoo of them on my back. This short series brings out so much that I love about them. We see bits and pieces from over the years and get a great background on their relationship. It is a must read for any fan!

Tales of Suspense featuring Hawkeye and Winter Soldier makes it toward the top of my list because of the interaction between Clint and Bucky. They both hate each other so much, because they both used to date Black Widow, which adds a lot of humor. I was laughing out loud while reading several parts. In this series there is also a lot of interesting things that come up. Stuff that maybe, just maybe, we will see in the Marvel Cinematic Universe at some point.

This is a big one for a very obvious reason. The events that are happening in this comic book series are likely setting us up for Avengers: Infinity War. I can only imagine that at least a few things will be dropped in to the movie. While the movies never seem to follow the comic book story lines exactly, we do tend to get snippets here and there. And I would be willing to bet this series will be tied in. Without giving anything away, we are basically being given a background of the Infinity Stones, and where they are located right now in the comic book universe. We also get a look at who is trying to collect them all – and why. This series is written by Gerry Duggan, who is brilliant. Don’t miss it.

If you are not watching Legion on FX than you are missing out on a masterpiece. This show is visual, brings me what I love about the character, and well – so much more. I highly recommend watching it. Now, I have loved Legion in the comics for quite some time. So when a new series LEGION started (with the story line TRAUMA), I knew I had to pick it up. Now, it isn’t exactly like the show, of course. But it is pretty amazing so far – at three issues in. If you like Legion, you will love this!

Every Marvel fan knows that Captain Marvel will be coming to the big screen March 8,2019. I for one, cannot wait. I loved Carol Danvers back when she was Ms. Marvel in the comics. Brie Larson has been cast as her, who I think will do an incredible job portraying her. I had stopped reading her comics when I had to cut some, but decided I better pick them back up. Not only because of her upcoming film, but because she seemed to be a big part in the Infinity Countdown series as well. Not to mention Civil War II. I knew I needed to catch up! And boy am I glad I did. I started at issue 127 – Marvel LEGACY DARK ORIGINS and I think that is a good starting point. Or even perhaps an issue or two earlier.

Join me LIVE on YouTube every Wednesday as I talk about the latest comic books!