This experience was all thanks to Marvel Studios and Disney, but the opinions are 100% my own. This post contains affiliate links.

Thor: Ragnarok hits theaters today and what better way to celebrate than to start shopping for Thor collectibles! To go along with this movie release, there are some pretty amazing products, and I want to tell you all about them. They are perfect for Marvel fans of all ages. Trust me, I want all of them – and so do my young daughters.

Summon the power of Thor with this Ultimate Mjolnir Hammer that features voice and sound effects. Inspired by Marvel’s Thor: Ragnarok, the hard foam head lets your little hero strike (in preapproved places, of course) and save the world! My girls have been having a ball with this hammer. So much so, that I have had to remind them the dogs are NOT trying to take on the Avengers.

Your little hero can Hulk out with this deluxe mask featuring Marvel’s Incredible Avenger. Opening your mouth activates a chin lever than opens Hulk’s mouth and moves his eyebrows, too! You should see my four year old – she practically lives in this mask now. And the Hulk fists you can read about next…

Get ready for super smashing action with these Hulk Smash Fists. Featuring heroic sound effects inspired by Thor: Ragnarok, these giant green gloves really pack a punch at playtime. HULK SMASH is now the catch phrase of my four year old. And this Marvel Mama LOVES it!

Thor’s world is about to explode in this exciting junior novel based on the upcoming film Marvel’s Thor: Ragnarok. His devious brother, Loki has taken over his home of Asgard, the powerful and ancient Hela has emerged with dark designs, and Thor is imprisoned on the other side of the universe. To escape and save his home, Thor must compete in an alien contest of champions, fighting his way to freedom against none other than his former ally and fellow Avenger… the Incredible Hulk! Features an 8-page color insert!

No geek collection is complete without a full set of Funko POPs! I have, well, more than a few. The Thor: Ragnarok set was recently released and it is AMAZING! In my collection, I have Loki, Korg, and Hulk – but I plan to get the rest soon. I mean, my collection needs to be complete right? I say yes!

Get them on Amazon!

Your child can role play the ultimate clash as Thor takes on the Hulk in this set based on the Thor: Ragnarok movie. Kids can take a break from screen time and take on a new challenge! They can play on their own or with a friend and act out the different scenes. This detailed set recreates one of the most popular scenes from the film, as Avenger battles Avenger in another world. My 6 year old has been BEGGING for this for Christmas. Since I want to help build it, I think it is safe to say she will find it under the tree this year!

Thor and Hulk engage in a gladiator battle in Thor: Ragnarok, and this large mug with sculptured handle captures the epic action in full color. Whatever adventure lies ahead, you’ll be ready with this heroic mug in hand. I hope my husband knows that I need this – it would be a great holiday gift! I collect mugs and this one is screaming to be a part of my collection!

The battle for comfort begins and ends when you slip on this bold, dramatic tee made of soft jersey knit and sporting a thunderous Marvel’s Thor: Ragnarok design. I mean, this is way cool right? I just love the design.

Your little hero will become the Marvel’s Mightiest Avenger with this Thor costume inspired by his latest adventure Thor: Ragnarok. This striking, authentic outfit includes padded tunic, detachable cape, and pants. My girls love to play dress up. Since my youngest has kind of become Hulk, I think it is only right that my oldest becomes Thor! 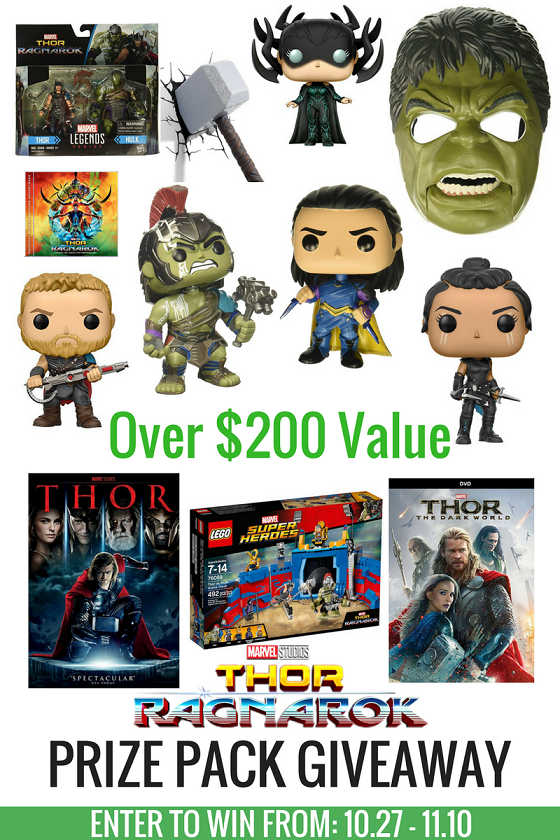 Yup, you read that right! In case you missed it, here is the link to enter to win a Thor: Ragnarok prize pack worth $250+! It includes many of these items I wrote about above – and so much more! This is a package that ANY Marvel fan is sure to love – so GOOD LUCK!

In Marvel Studios’ THOR: RAGNAROK, Thor is imprisoned on the other side of the universe without his mighty hammer and finds himself in a race against time to get back to Asgard to stop Ragnarok – the destruction of his homeworld and the end of Asgardian civilization—at the hands of an all-powerful new threat, the ruthless Hela. But first he must survive a deadly gladiatorial contest that pits him against his former ally and fellow Avenger – the Incredible Hulk!

Thor: Ragnarok is in theaters NOW!