While in LA for the Captain America Event, one of the things we got to do was be the first group to screen The Disney Channel’s upcoming original movie The Adventures in Babysitting. This film is actually Disney’s 100th Original Movie (has it been that many already?). It was inspired by the popular 1980s movie of the same name but it is “twice the babysitters, twice the fun.” It stars Sabrina Carpenter (of Disney Channel’s hit comedy series “Girl Meets World”) and Sofia Carson (of the hit Disney Channel Original Movie “Descendants“). In Adventures in Babysitting, a dull evening for two competing babysitters, Jenny (Sabrina Carpenter) and Lola (Sofia Carson), turns into an adventure in the big city as they hunt for one of the kids who somehow snuck away. Adventures in Babysitting premieres on The Disney Channel on June 24, 2016 – easy for me to remember because it is my daughter’s 5th birthday!

“Adventures in Babysitting” brings together two unlikely friends when a tedious evening for contentious babysitters, Jenny Parker (Sabrina Carpenter) and Lola Perez (Sofia Carson), turns into an exciting journey in the big city as they hunt for one of the kids who somehow snuck away. The story unfolds when Jenny and Lola, two girls with distinctly different personalities, both interview for a coveted internship opportunity and accidentally swap phones. In need of extra cash, audacious Lola nominates herself when the Andersons call Jenny looking for a last-minute babysitter. Meanwhile, dependable Jenny is already set to babysit the Cooper family for the evening. Lola’s first attempt at babysitting takes an unforeseen turn after Jenny discovers what Lola has done, and Jenny takes the kids to the Andersons to help rectify the situation. However, this leads all of them on an unexpected and exciting adventure of a lifetime.

The Adventures in Babysitting premiere telecast is sponsored by Post Fruity Pebbles and Cocoa Pebbles. It will be followed by the premiere of Disney Channel’s new comedy series Bizaardvark.

In a heartfelt story that celebrates individuality, friendship and self-empowerment, the live-action adventure comedy made for kids, tweens and families, pays homage to the 1980s classic with familiar references and iconic scenes.

Sabrina Carpenter plays the responsible and dependable Jenny Parker. She is an overachiever and focused on getting good grades and rounding out her resume with a coveted photography internship to get into college. The neighborhood’s go-to babysitter is looking after the Cooper family on a dull evening that turns into an adventure in the city.

Sofia Carson plays Lola Perez, the spunky free-spirited teen with a passion for art and photography. The first-time babysitter is responsible for the Anderson family, but when the eldest one sneaks out to go to a concert, she must venture into the city to find him.

Nikki Hahn plays Emily Cooper, an introverted teenager in need of an outlet to express herself. She has a love for indie music and secretly has a crush on Trey Anderson.

Mallory James Mahoney plays Katy Cooper, an adorable six-year-old who is a confident fashionista with style.

Max Gecowets plays Trey Anderson, the eldest of the Anderson family who sneaks away to go to a concert in the city. 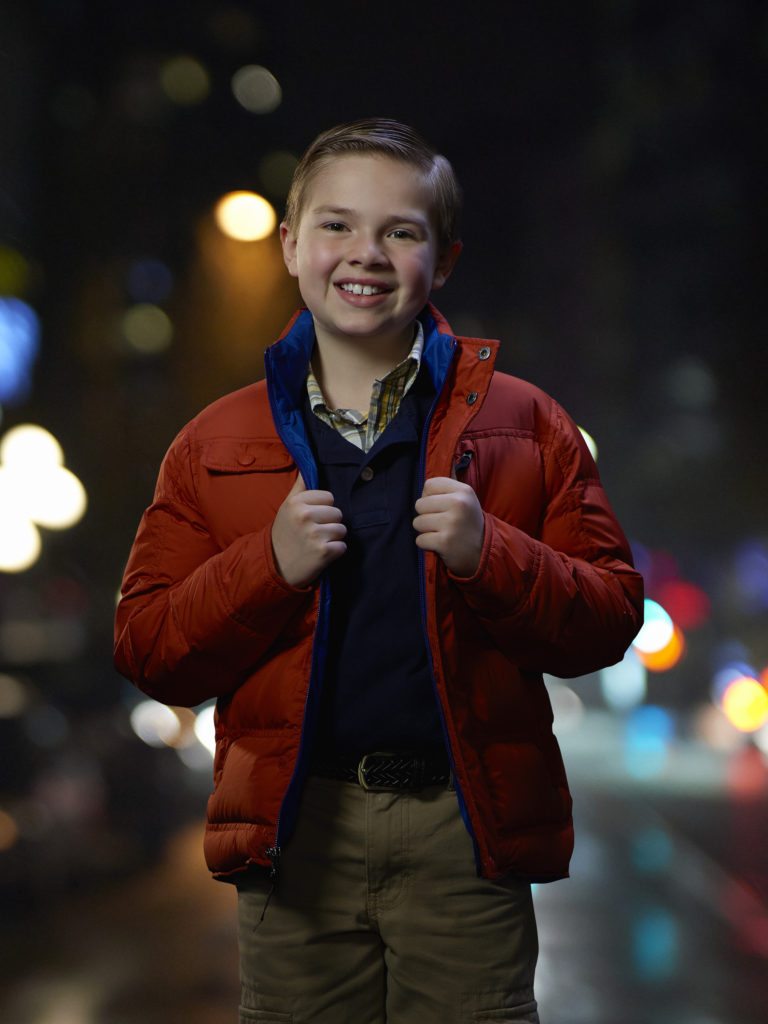 Jet Jurgensmeyer is Bobby Anderson, the Anderson’s middle child who is a chef wunderkind on a mission to find the perfect ingredient to add to his cupcakes for his junior chef competition.

I really enjoyed watching this movie, and I cannot wait for it to air so I can watch it with my 4 year old. She loves Descendants but I wonder if she will recognize Evie without her blue hair and fun outfits. The movie itself was really funny and I am looking forward to laughing at parts with my girls. It is a wild ride with stunts, action, and drama – and even a ferret! It takes inspiration from the original, but it is definitely not a remake. In my opinion, it is worth watching (again and again) – I already cannot wait to see it a second time. After the movie, we got to chat with Sofia and Sabrina and I must say, they are the sweetest girls. They are so polite, but they are funny too. We learned some inside tidbits about the movie which I will be sharing with you closer to the movie release (so stay tuned for that!).

“Adventures in Babysitting” is directed by John Schultz (“Judy Moody and the Not Bummer Summer,” “Like Mike”) and written by Tiffany Paulsen (“Nancy Drew”). The movie is executive-produced by Michelle Manning (“Teen Beach 2,” “The Breakfast Club”) and Chuck Minsky serves as director of photography (“The Princess Diaries 2: Royal Engagement,” “Mother’s Day,” “Valentine’s Day,” “New Year’s Eve”).

Be sure to watch Adventures in Babysitting – coming to The Disney Channel Friday June 24, 2016!

That’s not all – be sure to pick up Adventures in Babysitting on DVD June 28th, 2016 – includes Exclusive Bloopers Available Only on the DVD and a Magnetic Photo Frame! I will be getting this for my daughter’s birthday for sure!

FRIDAY, MAY 20: The digital single for “Wild Side,” the movie’s end credit song performed by Carpenter and Carson, will be available for purchase. A lyric video for the song will also premiere on Disney Channel.

FRIDAY, JUNE 3: An exclusive preview of the first 10 minutes of the movie will be available on the Disney Channel and Freeform Apps and via Disney Channel YouTube and Facebook.

FRIDAY, JUNE 17: Advance viewing of “Adventures in Babysitting” available on VOD and to verified users on the Disney Channel app for smartphones, tablets and connected TVs.

TUESDAY, JUNE 28: “Adventures in Babysitting” is available on DVD at retailers nationwide. The DVD includes exclusive bloopers and a complimentary magnetic photo frame.

The opinions expressed here are that of Mama Smith’s only. While the products in this post were given complimentary (unless otherwise stated) for me to review, that does not alter my opinion of the product(s) mentioned. This post may contain sponsored links and affiliate links (which will be stated at the beginning of the post).